As a member of AAF-ND, our local Ad Fed chapter, Tellwell (population 5) gets one free ticket for each of the association’s monthly Professional Speaker Luncheons. The Tellwell tradition is, the first one to RSVP when the notice comes out, gets that ticket. I happened to be the lucky first responder for March, and that earned me a lunch at the lovely Courtyard by Marriott, a sturdy notebook with a light-up pen from sponsor Midco, and a stellar presentation by Tug McTighe.

Armed with my trusty phone, I began to take notes in my preferred way, by tweeting highlights.

Tug is the Creative Director of DEG, a digital agency in Overland Park, KS. By way of introduction, he read through the slide that listed his upper crust clients and fancy-ass advertising awards at breakneck speed. He slowed down to a more normal rate to talk about the things that were truly important to him, such as his sources of inspiration, like award winning copywriter Luke Sullivan, and one of my favorite books, Hero With a Thousand Faces!

Any time a speaker mentions "Hero with a thousand faces" I know it's gonna be good!! @tugonthis #aafndjedi

Other things of importance to him were family, and a little advertising-themed podcast blog thing he hosts, called American Copywriter. In the podcasts, he and his co-host John January discuss advertising, hair, Star Wars, marketing, cicadas, and creativity. I’m here to tell you, his experience in the field of creativity and advertising (I can only guess about hair and cicadas) is second only to his impressive knowledge of Star Wars trivia. I was excited to hear how he was going to tie this all together.

His aptly named presentation, “Everything I Needed to Know About Advertising I Learned from Star Wars” did not disappoint. Tug, who’s Twitter handle is @tugonthis, played directly to our emotions, when he talked to this room full of creatives about –what else, creativity.  Creativity, he said, is the only thing that solves problems. Damn straight Tug, damn straight.

Creativity is problem solving in a different way — @tugonthis #aafndjedi

Tugging expertly on our nerd heartstrings, he compared the Rebel Alliance and their problem to solve – the evil Empire’s attempt to take over the galaxy – with the alliance of creatives assembled in front of him, who every day, use their Force of creativity to battle and solve Death Star-sized client problems. A hush fell over the room, as we took this in… We creatives were really Jedi Knights! I don’t know about anyone else in the room, but I could really see it! 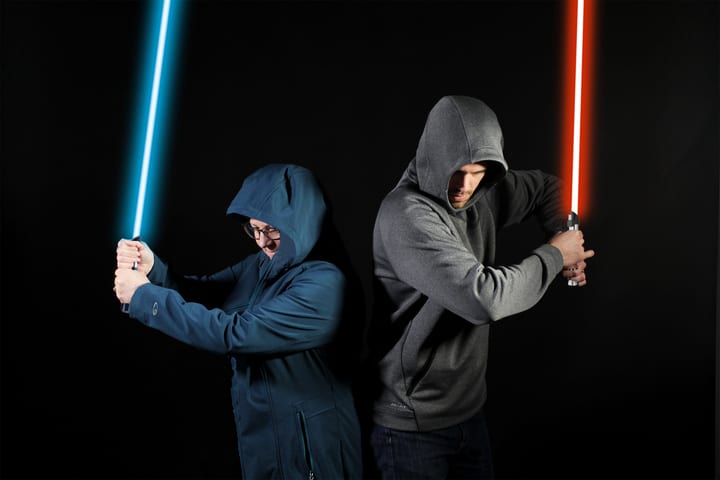 Seizing on the fact that we were all now his Padawan, Master Tug then wielded his awesome power of metaphor, to share with us his Six Tenets of being a creative Jedi in an agency galaxy not so far away.

Tenet 1 – All Jedi have a Master

Even Yoda, at 900 years old, the master of all Jedi Masters, knew he was also a student. We all have strengths which need to be nurtured, and in the world of Star Wars, young Jedi Knights are assigned a Master, or mentor. Tug explained the lineage of Masters and their respective Padawan… you can look that up if you want to, but what he was basically saying was – keep learning. FIND, or BE a Mentor, but learn either way!

The explanation of this tenet involved some pretty intricate Star Wars knowledge about natural and synthetic Kyber Crystals, and how the color of a Jedi’s lightsaber indicates their specific strengths or talents. What Tug was telling us, was that two heads are better than one. If you’re a copywriter meeting with a client, don’t go with another copywriter. Bring along a graphic artist, or a project manager – someone with talents that are different than your own. In short -Collaborate!

Tenet 3 – Work on The Work On Your Desk

“This one a long time have I watched. All his life has he looked away-to the future, to the horizon. Never his mind on where he was-what he was doing.” Here, Yoda basically says that Luke may be talented, but has never been able to concentrate on the matter at hand. Tug brought that message home by telling us how he begrudgingly created an ad for his boss’s daughter’s gymnastic team’s program. It was a small, boring project, that he didn’t want to do, but subsequently won an Addy for. The takeaway: There are no small projects. Give your full attention to the project you’re working on, and do it well.

Tenet 4 Beware of the dark side! (Anger, envy, pettiness, anxiousness) Remember the Ewoks " it might work" "yes&" #aafndjedi @tugonthis

Tenet 4 – Beware the Dark Side!

Yoda says, “Anger, fear, aggression: the Dark Side of the Force are they. Easily they flow. Quick to join you in a fight.” Basically, those dark emotions make you feel like you want to fight, and lordy don’t we all know it, you don’t ever want to fight with a client! If you feel yourself being pulled to the dark side, Tug gave us two ways to pull back. First, remember the Ewoks. According to him, those lovable denizens of Endor were the second most hated Star Wars characters, right behind Jar Jar Binks. I don’t believe that for a second… but I digress. The point Tug was making was that the Ewoks, using only items available to them in the forest, like sticks and stones, unbelievably (to some) were able to bring down the attacking Imperial soldiers. All the while being so cute you just want to hug them! The second way to avoid the dark side according to Tug, (and also Tina Fey) is to turn the conversation into a creative endeavor by using the first rule of improv – Always Say Yes. But not only yes – Yes, And… The benefit of saying ‘yes and’ is that now you have an open mind. Instead of being negative, you’ve just created an opportunity for new ideas.

Tenet 5 Do or do not, there is no try. Make it as good as it can be! @tugonthis #aafndjedi

This one had so much info I had to tweet it twice. Again, we hear Yoda’s wisdom telling us, if you have a great idea, do it, bring it, pitch it, sell it like there’s no tomorrow! Chances are it will get shot down, or at the very least have some holes poked in it. And that’s OK.

Tug reminded us that in the Star Wars movies, sometimes a Jedi dies, but there is always another one. What he meant was, not to worry about losses, just pitch those amazing ideas, and if you get rejected, don’t worry, there will be another amazing idea tomorrow.

Take celebrations seriously. When you have success – celebrate. They're always building another Death Star! #aafndjedi

At the end of many Star Wars movies, there is fanfare, or a parade, or an awards ceremony. In real life, you battle daily, long and hard, to win your client’s approval. You’ve survived changes, and late nights, and yes, some losses along the way. But in true Jedi fashion, the end, you won, and when you win, you celebrate!

Enjoy your celebration, because no matter how brilliant your latest creative endeavor was, you’ll need to start all over again the next day. Your clients are always building the next Death Star. May the Force be with you!

Taking on Tellwell: Why you should take yourself on as a client

If you're in agency life, you understand that clients come first. We call them our…

It's been awhile since we've had a plog, but don't worry! It's back, and better…