Using the Spokane video “The Pitch” as inspiration, we set out to create a video that was:

The result is “A Day in the Life,” starring Ryan Benneck as our friendly Fargo neighbor and young professional, leading us through a day in his downtown life.

Ryan (actor): We chose Ryan as our lead star after considering many different men and women from downtown Fargo. We were looking for someone who seemed friendly, neighborly, and not over-the-top one type of person (hipster, downtown-y, polished, wealthy, grungy, etc.) Ryan hits that middle ground of seeming like everyone’s neighbor, and was able to act out our vision during our shoot.

Marisa (voice):  After originally planning to use Ryan’s voice to narrate his own life, we created a sample version to test what it would sound like to have a narrator narrate Ryan’s life “from above.” We made the decision to use this version because it allowed for inner dialogue between the narrator and Ryan, adding more humor and more creativity in what the narrator could say. We used Marisa’s voice as it was the best way to record exactly the tone and feeling we wanted, it allowed us to make edits to meet Kilbourne Group’s desires for the script. Having a female narrator also balances having a male lead. 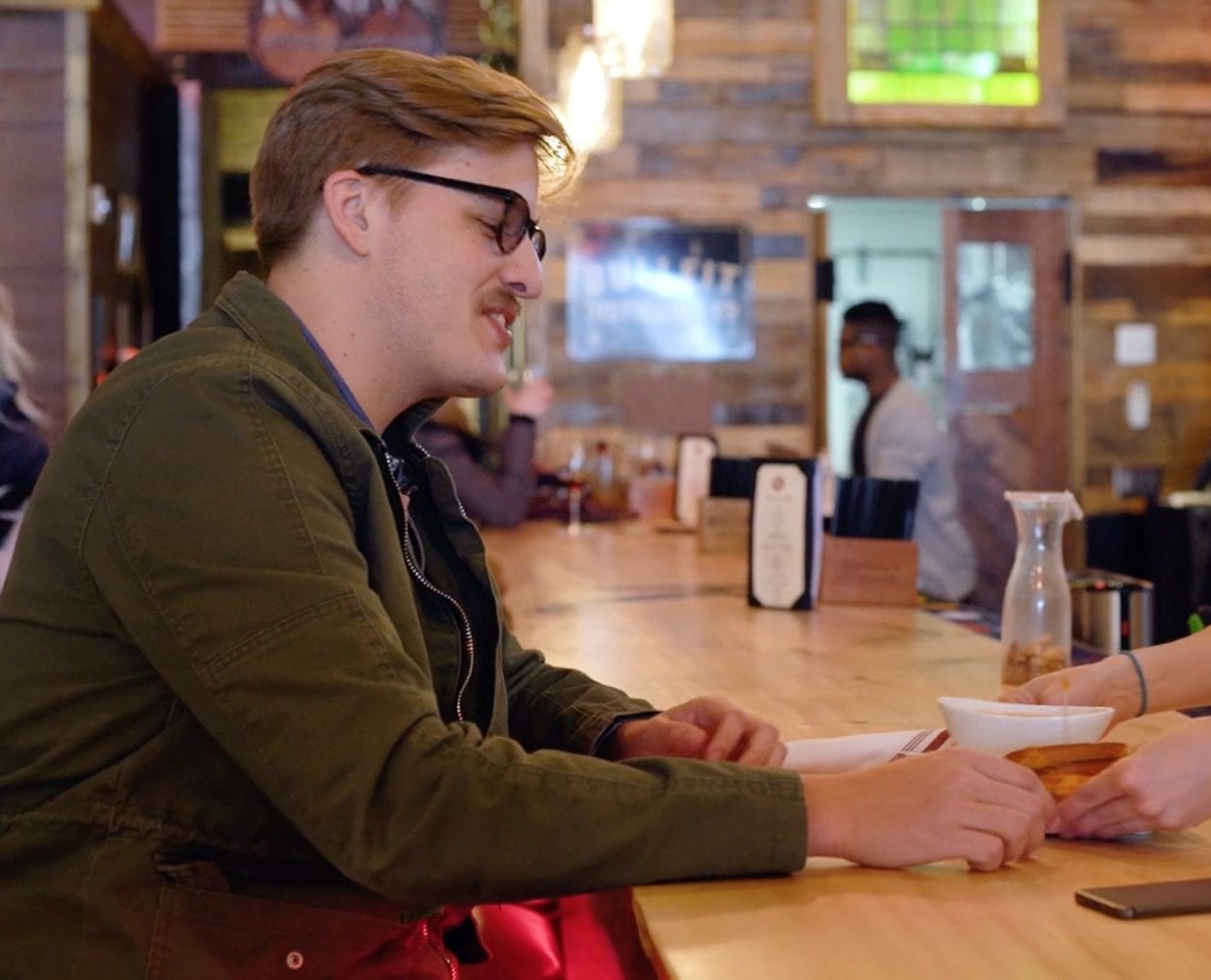 Here’s a few of our shared goals with this video, and a brief description of how we sought to accomplish them in the video:

Using the staged apartment, we included shots of the bedroom, living room, kitchen and bathroom throughout the video.

Highlight local businesses that are nearby RoCo

Show the walkability of living downtown

Ryan walks everywhere! And we included a few lines that mention walkability, such as: “Just like everything else, it’s just a few minutes walk from his RoCo apartment.”

Show the camaraderie and community of downtown

We wove in some mentions of others in the community (Megan and Girl Develop It, Kyle and the Game-Makers), and have Ryan waving to people on the street, sharing meals, and drinks with friends

Give a comprehensive feeling for “working, living, and playing” downtown

By using the framework of “A Day in the Life” we create a story arc that highlights every aspect of a downtown living experience — following RoCo’s emphasis on the “urban adventure.” We were purposeful in showing Ryan working, socializing, eating, grocery shopping, exercising, and relaxing. Our goal is to have viewers thinking, “yeah, that could be me.”

Make the video humorous, memorable, and shareable via social media

We used the Spokane video as inspiration to make the RoCo script self-aware, with dialogue between Ryan and the narrator and lots of quirky humor thrown in. (ie: “Mmm, Avocados! Good choice Ryan.”) Bright colors, warm music and a Fargo montage at the end make it a fun video for any #ilovefargo fan to share (such as City of Fargo, Visitors Bureau, etc.)

Leave viewers feeling intrigued and interested in living at RoCo

The video comes full circle, starting and ending with Ryan’s RoCo apartment being the heart of the adventure. The RoCo apartment is mentioned a few times throughout the video as nearby, or “just a few minutes away,” emphasizing it as central and convenient. Ending the video with a scene at RoCo, with a whisper “You can live there!” at the end, is a subtle way of nudging people to think about the possibility that they could live there, too.