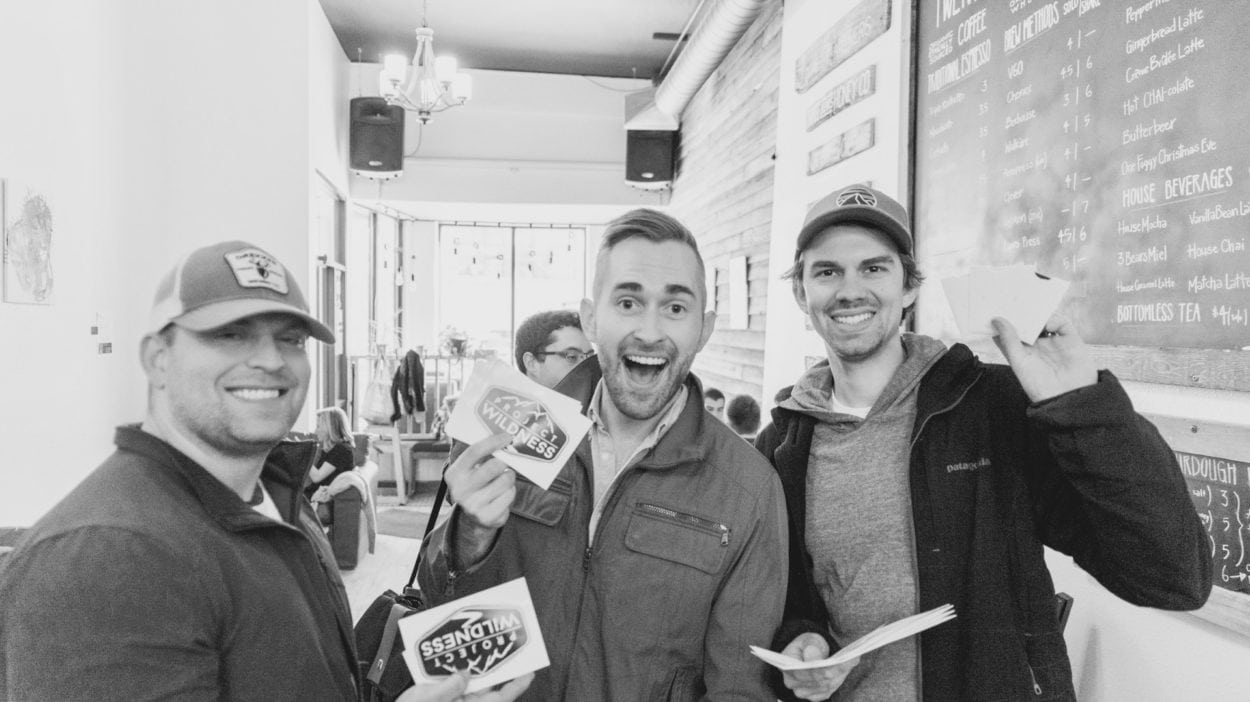 By Marisa JackelsFebruary 20, 2017Uncategorized
No Comments

It was an unseasonably warm Friday afternoon on National Random Acts of Kindness Day, February 17. It put Team Tellwell in good spirits as we headed to the Prairie Den, where Project Wildness, a local non-profit dedicated to spreading acts of kindness, was hosting a special event.

When we arrived, we were greeted by Nate and Shane, the co-founders of Project Wildness. They explained what the next hour would hold. Each team received $100 and a half hour to go out and use it to spread as much kindness as possible.

“Get creative,” they said. “You can buy lunches for people, you can buy gifts, it’s up to you!”

In addition, Lucid Bakery donated boxes of treats — salted caramel chocolate chip cookies, raspberry swirl brownies, and more — to hand out to strangers and make their day a bit sweeter. With the clock ticking, we hit the streets.

Truth be told, people are — perhaps rightfully so — naturally skeptical. Being offered something for free, with the simple explanation that “It’s Random Acts of Kindness Day!” is not an everyday experience. Too often a gift comes with an added agenda, a ‘sign here’ or ‘buy this’. But these gifts had no strings attached. Before long, people caught on, and our first recipients were a group of guys heading back from lunch. They accepted the sweet treats with big grins. After all, in the end, who doesn’t love a good cookie? 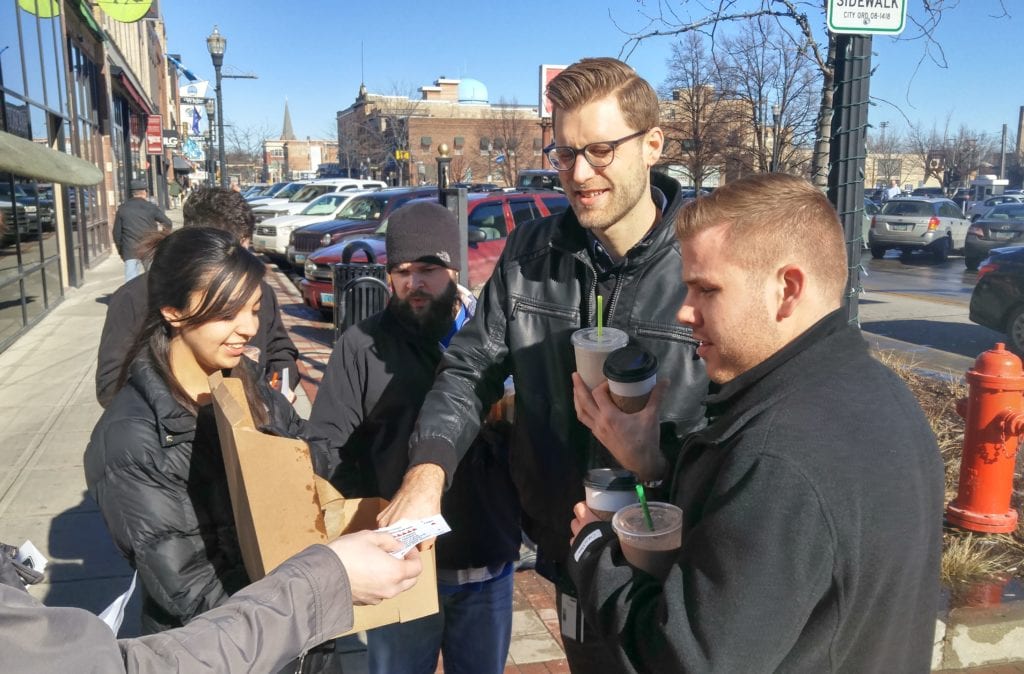 The next part of our plan was this: to buy gift cards from local businesses (support local shops!), package them in an envelope, and stick them on people’s cars. Yes, usually where a parking ticket would go, but instead of a ticket you would find a gift card and a note.

“Happy Random Acts of Kindness Day!” we wrote in each one. “No, this is not a parking ticket, it’s a random gift to make your day awesome. Enjoy. Spread the love — pass it on!”

We signed it “A friend” and included a sticker for Project Wildness, where you can read even more stories of kindness shared across the country. 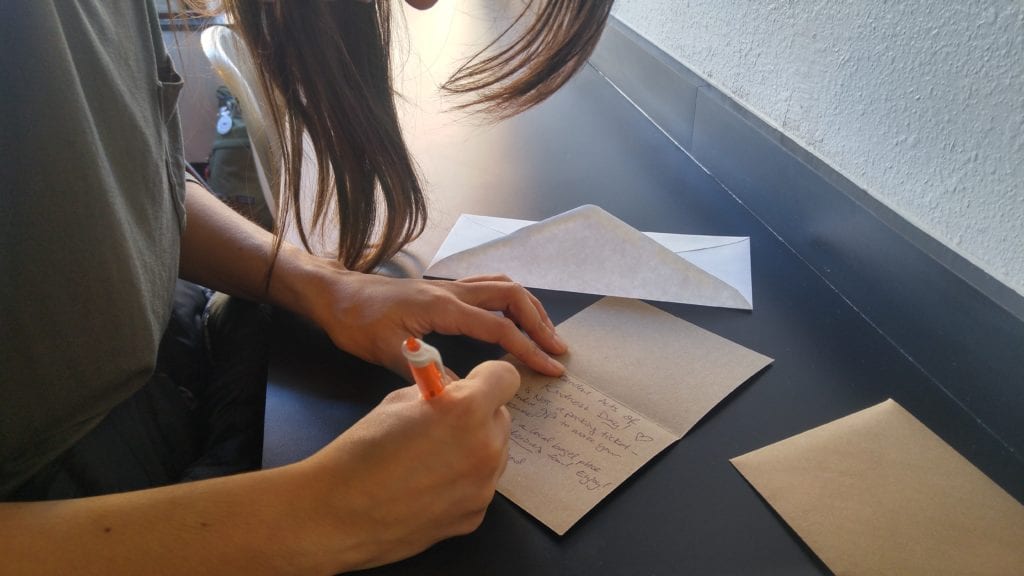 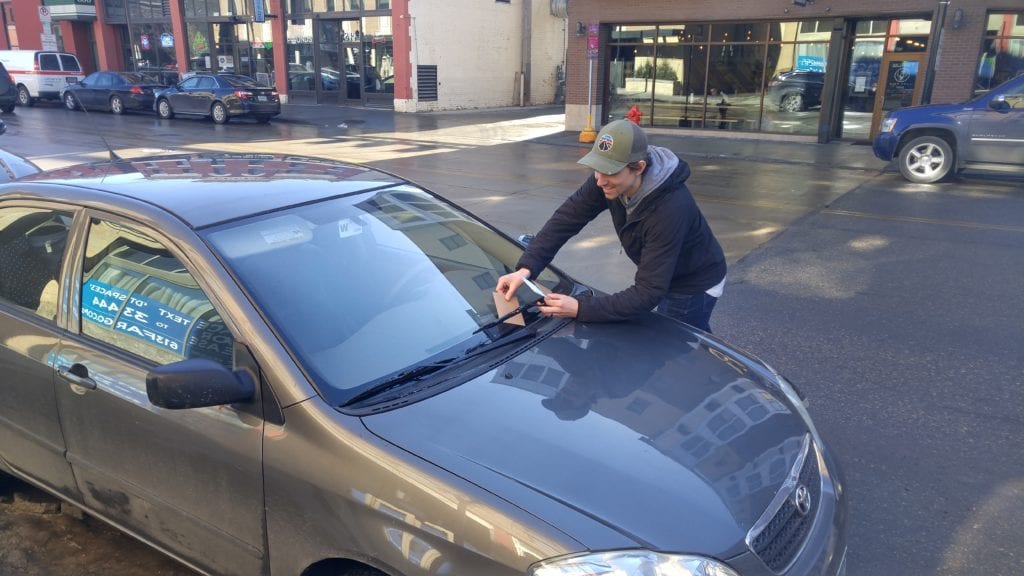 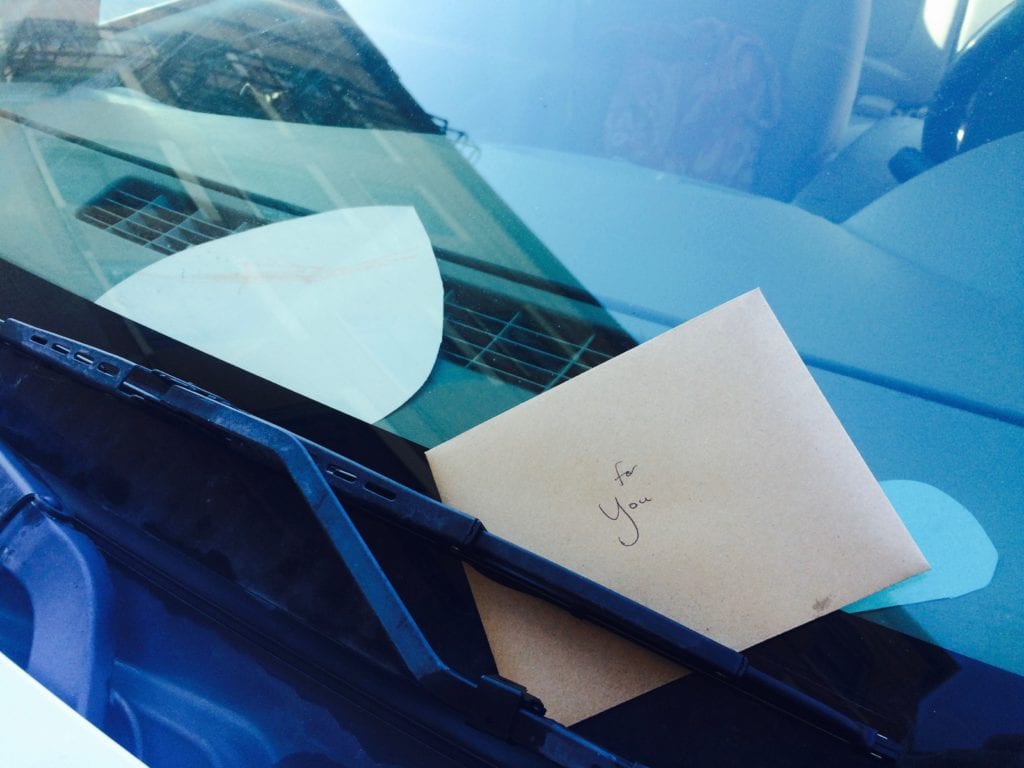 In total, we purchased three $10 gift cards to Twenty Below Coffee, a local coffee shop, and three from BernBaum’s, a bagel place downtown (and one of Team Tellwell’s favorite places for lunch!). We also gave BernBaum’s an extra $20 to cover the next few lunches. “Make sure to wish them a Happy Random Acts of Kindness Day!” we told the cashier. She smiled and nodded. “You got it!” (We were later told by chef Andrea Baumgardner that a sweet couple got the lunch and were surprised and delighted. )

As Andy went on his own adventure passing out the rest of the Lucid Bakery sweets on Broadway, the rest of us set off to place the envelopes in various vehicles. At one of the first ones, the owner began approaching the car just as Noah finished placing the envelope in her windshield wiper!

“Uh — we left you something!” he said, abruptly, and then we ran off. It was like ding-dong ditching but with gift-giving instead of being obnoxious. Turns out, our teammate Grace knows this girl, and saw she later posted on social media celebrating her gift. 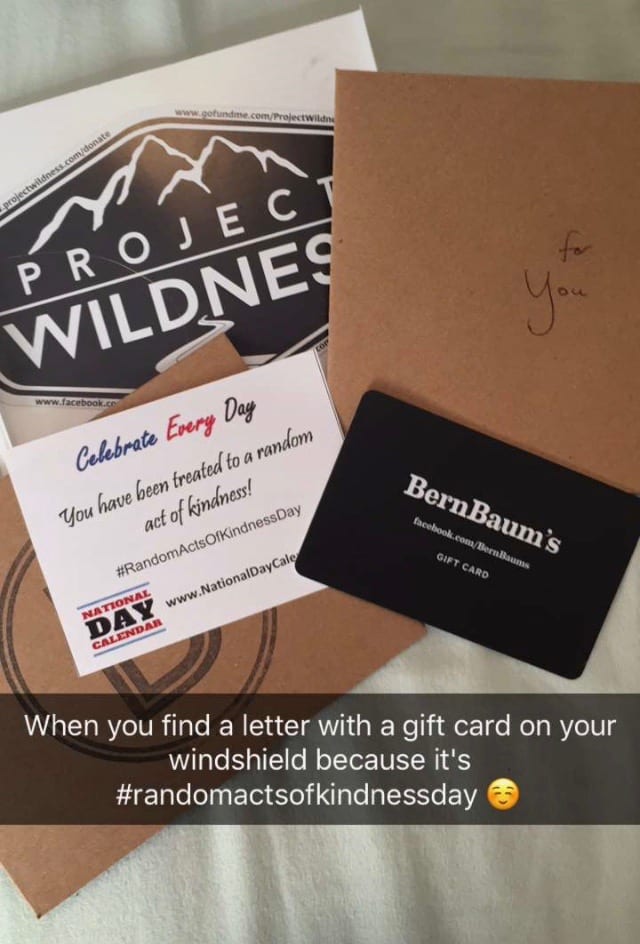 Then there was the FedEx truck where I (Marisa) attempted to sneakily deliver an envelope by placing it on the handle near the driver seat. We watched to make sure he got it — but he entered from the back of the truck, and started driving without seeing our gift! Thankfully it stayed put, and when he stopped at the alley, I ran up and handed it to him directly.

“It’s Random Acts of Kindness Day – this is for you!” I explained. His concerned expression broke into a smile.

With the rest of the envelopes tucked into the wipers of various cars, we headed back to the Prairie Den to reconvene with the other teams. Andy returned as well, with a nearly empty box of sweets, claiming he was able to give them all away to people out and about. “They loved it,” he said. Over fresh pizza donated by Rhombus Guys (thanks Rhombus Guys!), we swapped stories from the afternoon. The other team had purchased roses from local floral shop Love Always and handed them out to strangers. They too received reactions first of surprise, then joy as people realized there was no hidden agenda. 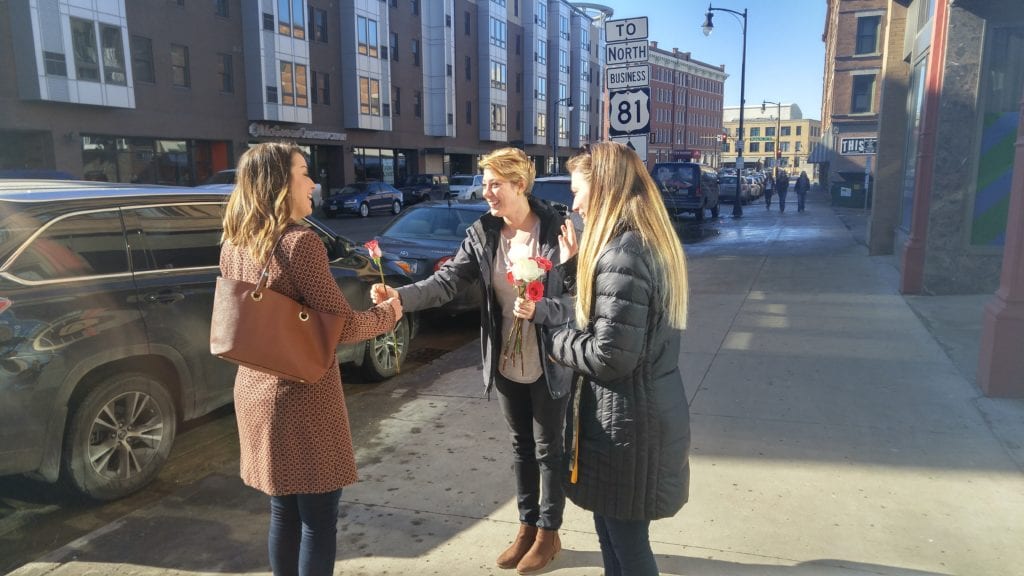 Marlo Anderson, the creator of National Day Calendar, was monitoring the activity of the #RandomActsofKindnessDay hashtag. He stopped in to say congratulations, sharing that over 120,000 hits had come through the National Day Calendar website already. In fact, the website had a temporary shutdown due to the amount of traffic.

As we wrapped up, we still had $20 tucked away for a special gift. You see, one Tellwell teammate was not able to join us. The lovely Miss Linda had stayed behind due to knee pain. What better way to spread kindness than with a handwritten letter…and a little Cabernet Sauvignon?

On our way back to the office, giddy with the thoughts of all the gift cards strangers would soon be receiving, we stopped and picked up some red wine and a card that read, “You’re one in a Melon.” 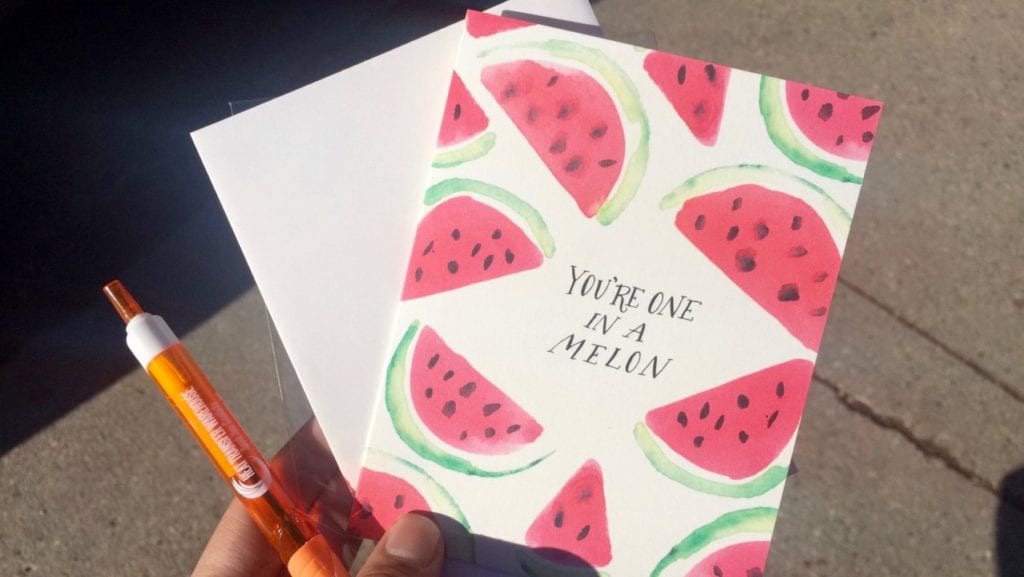 “How was it?” Linda asked as we all came in. We ran over and handed her the gifts.

“It was great — and hey, Happy Random Acts of Kindness Day!”

Thus concluded our adventures of the afternoon. And while they may have lasted less than two hours, the joy of giving to others lasted the rest of the day. We encourage everyone and anyone reading this to go out and experience your own random acts of kindness adventure! Whether it’s sharing a gift or a simple hug, you don’t need a special day to spread some love. All you need is that first step. 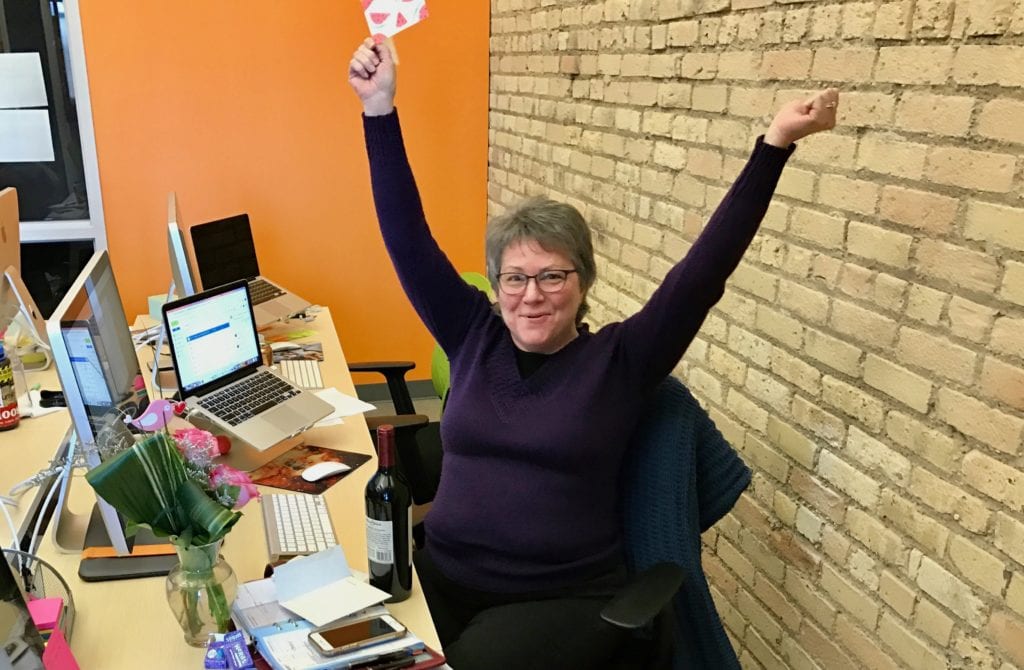 _ _ _
Special thanks to the donors of Project Wildness who contributed finances for these special gifts! Learn more about their work, here.

Learn more about Tellwell for Good and our work with local non-profits, here!

Marisa is a Southern California native who moved to Fargo-Moorhead for Concordia College, and stayed for the hotdish and warm community. Whether through words or film, she revels in storytelling in a variety of mediums, always seeking that magical moment where the story comes together to create something emotionally impactful.